Physiotherapist in Jordan: It is a joy to see traumatized women smile again

Rasha Hammad has always dreamed of being a physiotherapist and helping people overcome their pain. Her view of physical pain changed when she began treating traumatized refugees.

27-year-old Rasha Hammad was once convinced that you could cure all physical pains and defects through physiotherapy.

That view changed when she started working with traumatized torture survivors at the Institute for Family Health, DIGNITY’s partner in Jordan.

»When I started working here, I was a bit naive and thought I could help all traumatized and torture survivors get physically well again. But my work has taught me that the mental injuries from war, flight and torture over time turn into physical pain,« says Rasha Hammad.

On a daily basis, she is a team leader at the Institute for Family Health, responsible for group treatment of traumatized women with physical and mental pain. She helps traumatized women deal with pain and stress in everyday life.

»When I started my job, I often went home being a little upset. I thought I could remove their physical pain with the help of treatment. It disappointed me if a person with walking difficulties due to torture did not get better«.

Through the work, Rasha Hammad created a network with other physiotherapists in order to share knowledge about working with traumatized patients. And it helped her with the frustrations that she struggled.

The Nour Al Hussein Foundation – Institute for Family Health (IFH) has been DIGNITY’s partner since 2008. They work in 12 different cities, including one of the world’s largest refugee camps for Syrian refugees, the Zaatari Camp, which houses about 80,000 refugees.

In 2017 Rasha Hammad came across a job advertisement in a Jordanian newspaper in which she became aware of the job as a physiotherapist for traumatized refugees and torture victims. She applied immediately, and she hasn’t regretted it since:

»As a physiotherapist, you are involved in the treatment from start to finish. And when I can see a development and find out that my patients are now able to handle stress and pain with exercises, then the journey has been worth it«, says Rasha Hammad. 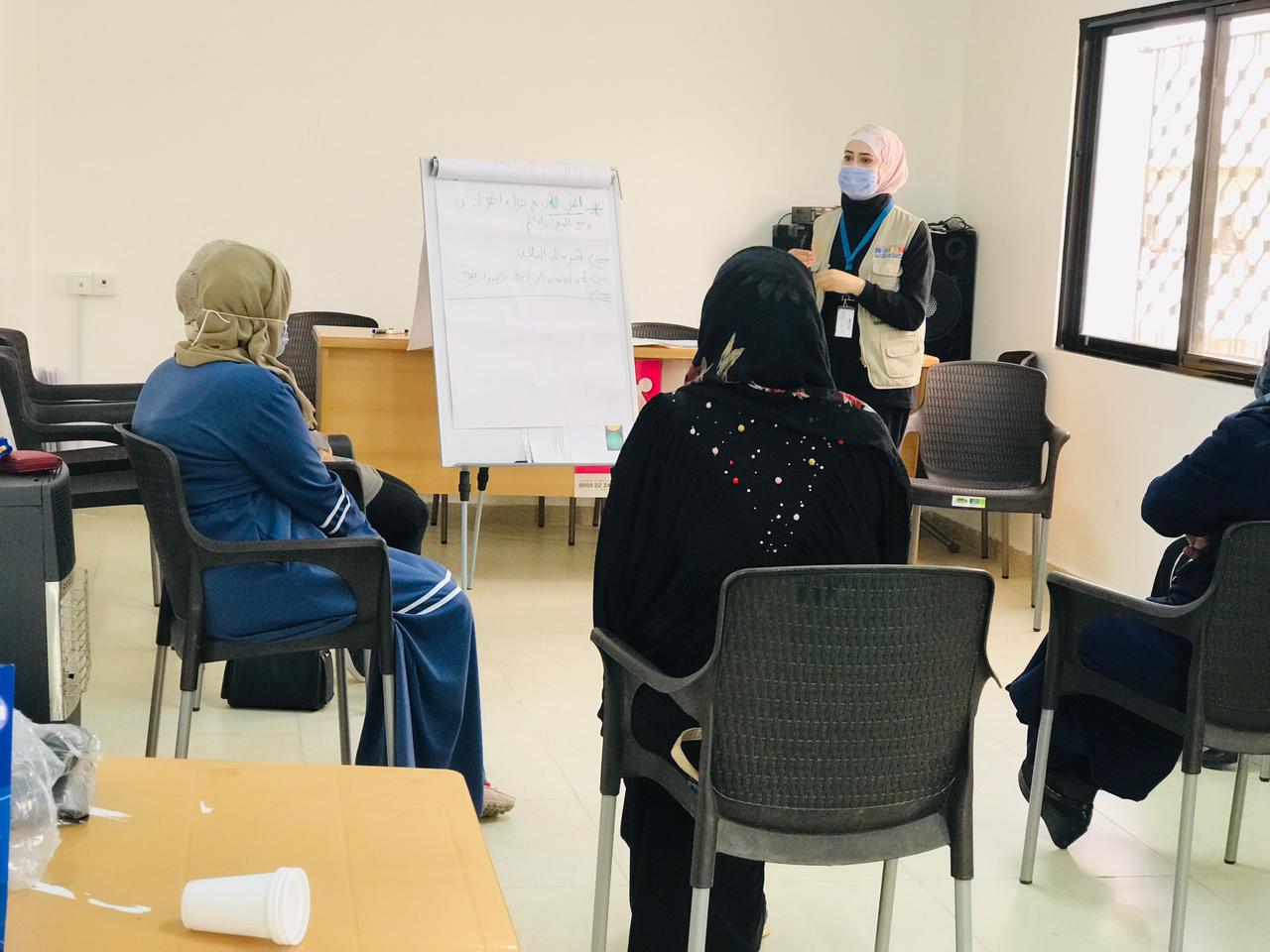 A course of treatment takes place over 10 group sessions, where women who have been through war, flight or torture are helped to deal with their trauma both mentally and physically. Since mid-2020, the Institute for Family Health has treated approximately 250 women.

It is well-documented that many Syrian refugees are traumatized from civil war and flight. A research project involving 8,000 Syrians across 10 countries in the Middle East, Africa and Europe shows that 43 percent suffer from post-traumatic stress. 40 percent are affected by depression, and 26 percent suffer from anxiety.

One Syrian patient in particular has made a big impression on Rasha Hammad during the course of treatment.

»I had a patient who had constant back pain, sleep problems and muscle problems. Her doctor kept saying she wasn’t ill. He told her to eat painkillers«.

Rasha Hammad often finds that the women in her course of treatment have been incorrectly medicated or instructed in an inappropriate way by their doctors.

The Syrian woman had fled the civil war and lost her brother. The events had put their mark on the woman’s body to such an extent that she was constantly in pain. She found no peace of kind as she tried to make up for her lost sleep.

Fortunately, a positive development occurred with the woman.

»When we finished the treatment, she was no longer depressed. She could understand her body’s reactions through body awareness teaching. She understood why she had now been in pain. But most importantly, she went away with tools to help her relax and exercise when she has body aches. To me this is a success story«.

Rasha Hammad is even more motivated by helping traumatized refugees when she sees the positive effect it has on daily life, where her patients can now smile again. The women’s gratitude is her greatest motivation.» One of the most touching compliments I’ve received was from a Syrian woman. She said I was a good physical therapist because I understood why she was in pain«.

Progress in the battle against torture of psychiatric patients in Ghana

In future, staff at institutions for young offenders must take the child’s best interests into

Sign up for DIGNITY’s newsletter and stay updated about our work.