Mizan: Surge in complaints about domestic violence during the corona crisis

The quarantine results in increased gender-based violence in several parts of the world. Also in Jordan, the director of the Mizan Law Group, a non-governmental organization providing legal assistance for vulnerable women and children, experiences a surge in domestic violence complaints. However, Mizan quickly adapted to the crisis in order to maintain contact with the women.

Eva Abu Halaweh, how has the corona crisis affected your work with vulnerable women?

»Since the first day of the crisis we began to receive complaints from women about domestic violence. Domestic violence clearly tops the list of complaints we received during the quarantine, this because afflicted women were now locked in with their husbands all day. In some of these cases, the women sought advice from us in the past, but they have not been ready to leave home or officially complain until now. Suddenly, the women felt that they were imprisoned in their own homes together with their abusers. The increased domestic violence is not only a Jordanian incident, but unfortunately a global tendency. It has prompted UN Secretary-General António Guterres to publish a statement urging the world’s states to act on the increased violence against women during the corona crisis.«

Can you give an example of how you help these women?

»We had a Filipino woman who was married to a Jordanian. She was victim of domestic violence and for safety reasons had to leave her house as quickly as possible. We supported her in her complaint, which resulted in her husband being arrested. We made sure she was offered a safe place to stay until she returned to her work last week.«

»We follow up on all cases to the best of our ability, despite it being challenging during the quarantine and the lockdown of our society also including the courts. However, it has been possible for us to report the cases to a section of the Public Security Department, locally known as the ‘Family Police’ (Family Protection Department) with whom we maintain a good relation. In addition, we offer support by finding a safe place to stay for the women seeking refuge from the violence.«

How did Mizan adapt during the corona crisis in order to continue the services?

»Our clients usually came to our office, which was no longer an option. We feared that we would no longer be able to reach the exposed, so we took the initiative to create a Facebook page. This is the first time in our history that we are online. In addition, we also circulated a Whatsapp number. In some situations, we even provided our private telephone numbers where direct contact could be made.«

»In collaboration with DIGNITY, we have now started sessions with online psychosocial support. The sessions are aimed at women exposed to domestic violence as well as victims of torture, inhumane and ill treatment, but we also get other inquiries from people who are scared and uncomprehending of the whole situation and in need of advice. We try to help where we can.” 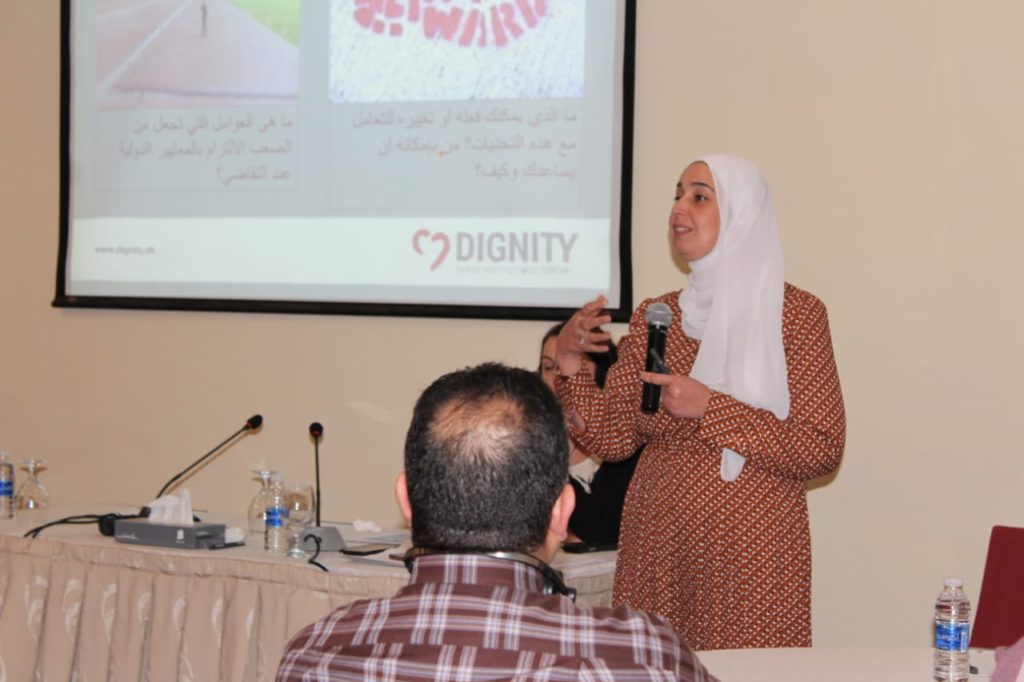 Eva Abu Halaweh is a human rights lawyer and the Executive Director of Mizan for Law, a non-governmental organization founded in 1998, providing legal protection for women exposed to violence and discrimination, vulnerable children, as well as victims of torture.

Mizan works on promoting an efficient justice system in accordance with Human Rights standards. Mizan has since 2008 been DIGNITY’s partner in the national anti-torture programme ‘Karama’, funded by The Danish Ministry of Foreign Affairs through the Danish Arab Partnership Programme.

The programme is inspired by an approach of mutual responsibility where state institutions and CSOs corporate to achieve the common goal of eliminating the use of torture and other cruel, inhumane or degrading treatment or punishment.

Progress in the battle against torture of psychiatric patients in Ghana

In future, staff at institutions for young offenders must take the child’s best interests into

Sign up for DIGNITY’s newsletter and stay updated about our work.