DIGNITY’s work » Legal work in the fight against torture

Legal work in the fight against torture

DIGNITY works to ensure that Denmark upholds its international obligations in accordance with the UN Convention against Torture (1984) and the European  Convention on Human Rights (1950). Our legal experts sound the alarm when national practices or laws are at risk of conflicting with international conventions and standards. The work entails drawing up responses to legislative drafts, legal advice, trainings (for instance at the Danish Police Academy and the  Faculty of Law at Copenhagen University) and advocacy, which includes the collection and dissemination of research results and other relevant knowledge. For instance, DIGNITY focuses on the widespread use of solitary confinement as a disciplinary measure in Danish prisons, and advocates for the use of alternative measures.

DIGNITY finds it extremely worrying that the government is considering transferring asylum procedures and the protection of refugees in Denmark to a third country outside Europe. In the light of the enormous consequences of the new asylum scheme, we must therefore strongly urge the government to carry out a thorough legal assessment of Denmark’s international obligations and to reconsider the desire to transfer asylum seekers from Denmark to have their asylum cases processed and be protected in a third country outside Europe.

In collaboration with several Danish civil society organisations, DIGNITY’s legal team produce shadow reports and other material to be used in the reoccurring examinations of Denmark within the United Nations. Here, the experts of the UN and other member states are made aware of areas of concern and positive and negative developments, so that they may recommend and demand improvements. It particularly entails reporting to the UN Committee Against Torture, the UN Human Rights Committee and the UN Committee for the Rights of the Child, and the Universal Periodic Review-process.

In DIGNITY’s partner countries, including countries in the Middle East and North Africa, we support local partners in their efforts to prevent torture and establish effective legal guaranties, which can protect citizens against abuse. Among other things we work to minimize the use of pre-trial detention, as there is a high risk of torture or other inhuman, degrading treatment during this period.

DIGNITY works with local public prosecutors and judges to ensure that they have the necessary knowledge about international conventions and human rights standards. Such knowledge ensures that torture cases are correctly identified and documented, which heightens the chance that victims will receive the help and redress they are entitled to.

Tunisian politicians have (with the support from DIGNITY) adopted an important reform of the country’s procedural law. The reform means improved rights for those arrested, and is a safeguard against torture.

An EU-report from 2017 have shown that Jordan’s use of pre-trial detention has been lowered by 17 % from 2015 to 2016, among other things thanks to a new case-monitoring system implemented by the Jordanian Ministry of Justice with the support from DIGNITY.

DIGNITY has experts represented in the European Committee for the Prevention of Torture (CPT) and the UN Committee against Torture (UNCAT).

DIGNITY is also engaged in the development of international norms at the United Nations and regional levels, and provides substantial input to the annual UN-resolutions on torture at the General Assembly and the Human Rights Council. Recently, DIGNITY has contributed to the drafting of a resolution on police custody and detention proceedings (2016) and the negative consequences of corruption on the freedom from torture (2018) adopted by the UN Human Rights Council.

Go to our fact sheet collection

THE LEGAL DEFINITION OF TORTURE

DIGNITY works based on the UN definition of torture, which is to be found in the UN Convention against Torture and other Cruel, Inhuman or Degrading Treatment or Punishment from 1948:

“For the purposes of this Convention, the term "torture" means any act by which severe pain or suffering, whether physical or mental, is intentionally inflicted on a person for such purposes as obtaining from him or a third person information or a confession, punishing him for an act he or a third person has committed or is suspected of having committed, or intimidating or coercing him or a third person, or for any reason based on discrimination of any kind, when such pain or suffering is inflicted by or at the instigation of or with the consent or acquiescence of a public official or other person acting in an official capacity. It does not include pain or suffering arising only from, inherent in or incidental to lawful sanctions.”

Ergun Cakal, Debility, dependency and dread: On the conceptual and evidentiary dimensions of psychological torture, in Torture Journal, Volume 28, Number 2, 2018.

Rytter, T.M. & Huber, A. (2018). 'Women in the Criminal Justice System and the Bangkok Rules', in Gender Perspectives on Torture: Law and Practice. Published by Center for Human Rights & Humanitarian Law: Anti-Torture Initiative at the Washington College of Law at the American University.

Solitary Confinement as a Disciplinary Sanction

Download No. 7 | CONDITIONS FOR WOMEN IN DETENTION - Needs, vulnerabilities and good practices

Download No. 9 | CONDITIONS FOR WOMEN IN DETENTION IN JORDAN

Download No. 9 | CONDITIONS FOR WOMEN IN DETENTION IN JORDAN (ARABIC)

Download No. 10 | CONDITIONS FOR WOMEN IN DETENTION IN ALBANIA

Download No. 11 | CONDITIONS FOR WOMEN IN DETENTION IN THE PHILIPPINES

Materials from DIGNITY and partners 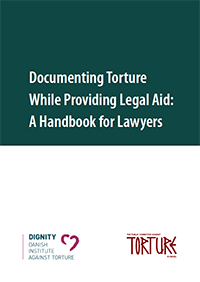 This handbook aims to assist lawyers worldwide, and to offer ideas and suggestions — based on PCATI’s extensive field experience — of how to provide the best legal aid while attempting to promote accountability of perpetrators and justice for the victims. 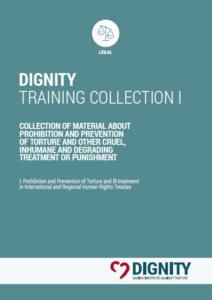 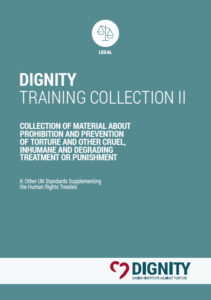 COLLECTION OF MATERIAL ABOUT PROHIBITION AND PREVENTION OF TORTURE AND OTHER CRUEL, INHUMANE AND DEGRADING TREATMENT OR PUNISHMENT
II: Other Relevant UN Standards Supplementing the Human Rights Treaties

COLLECTION OF MATERIAL ABOUT PROHIBITION AND PREVENTION OF TORTURE AND OTHER CRUEL, INHUMANE AND DEGRADING TREATMENT OR PUNISHMENT
IV: Instruments juridiques régionaux et internationaux

COLLECTION OF MATERIAL ABOUT PROHIBITION AND PREVENTION OF TORTURE AND OTHER CRUEL, INHUMANE AND DEGRADING TREATMENT OR PUNISHMENT
V: Arabic Collection of International and Regional Legal Standards

TOWARDS A LAW (ENGLISH)

MIZAN’S STUDY ON A NEW ANTI-TORTURE LAW IN JORDAN

TOWARDS A LAW (ARABIC)

MIZAN’S STUDY ON A NEW ANTI-TORTURE LAW IN JORDAN